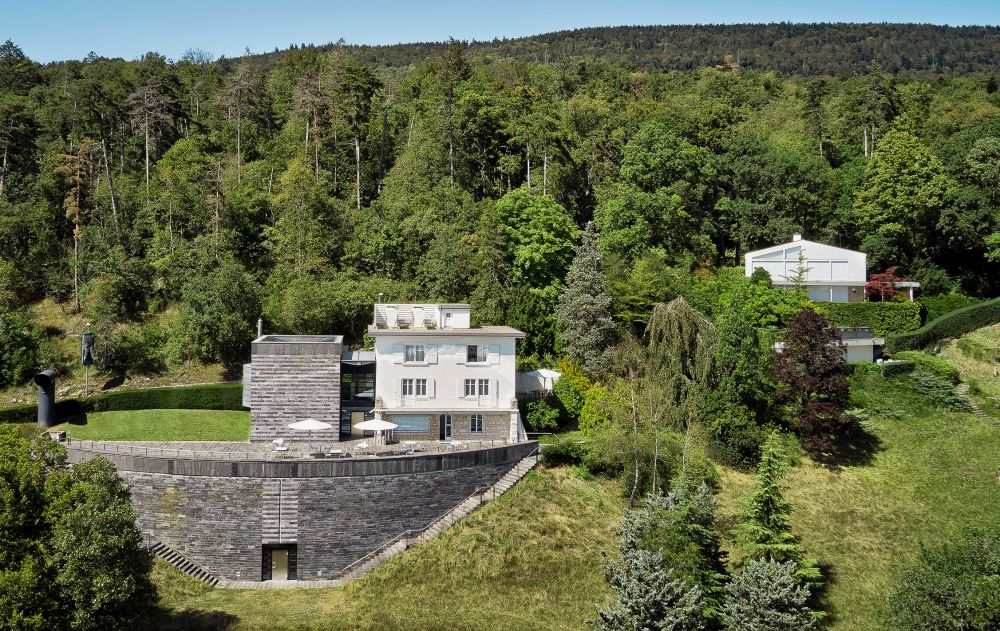 The CDN was built by Mario Botta around the first home of Friedrich Dürrenmatt and his family in the Vallon de l’Ermitage, which they moved into in 1952. A second villa was built in 1965, which was first used as a working space and later as a residence. It was from this lookout, nestled high above the town of Neuchâtel, that the Swiss polymath penned most of his plays which are now known throughout the world, and where he created the majority of his visual works.

Dürrenmatt’s ‘Sistine Chapel’ has been visible to the public since the CDN first opened. Since 2021, Dürrenmatt’s library can also be admired by visitors, and his study can be visited every Saturday and is also included in guided tours. Meanwhile, the pool has been redesigned as a performance space, while a leafy trail now links the Botanical Garden and the CDN. 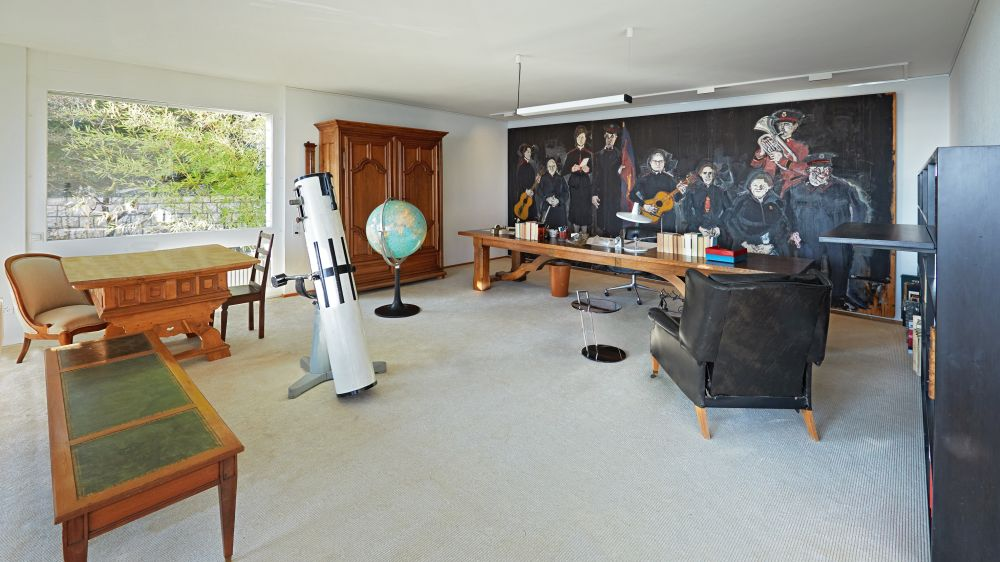 Friedrich Dürrenmatt’s study can be visited every Saturday from 11am to 1.30pm and from 2pm to 4.45pm (except on days when the CDN is closed). A guide welcomes visitors and provides an insight into this intimate location that is imbued with history, where Dürrenmatt would write and draw. Admission is included in the ticket price; bookings are not possible. The office is currently not accessible to people with reduced mobility.

In 1964, thanks to the success of his plays ‘The Visit’ and ‘The Physicists’,  Friedrich Dürrenmatt had a second villa built, just above the family home. He designed this second property to house his working area, his study and his painting studio. It was only later, accompanied by his second wife Charlotte Kerr, that Dürrenmatt took up residence there.

Today we can visit the study, which features various personal objects that symbolise Friedrich Dürrenmatt’s life and work. On his desk there are two piles of paper: one for writing and one for drawing, as well as his telescope, which reminds us of his passion for astronomy, and his globe, which reflects his openness to the world. 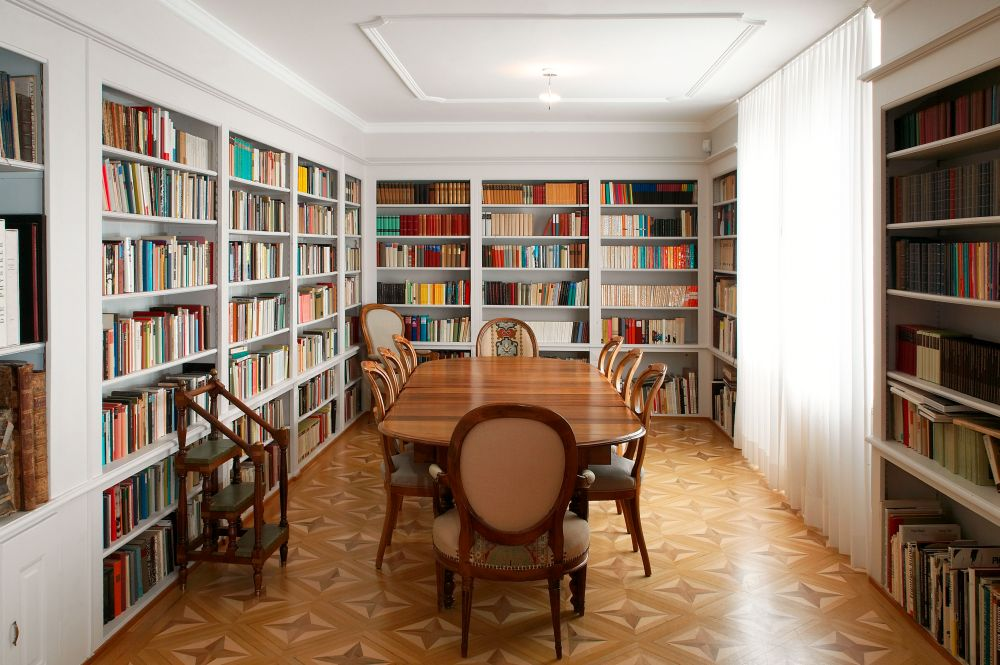 Friedrich Dürrenmatt would spend time in his library drinking coffee, reading, or talking to his guests. The room, which has been preserved with its original furnishings, houses over 4,000 volumes of world literature. There are classical authors that Dürrenmatt was a fan of – including E.T.A. Hoffmann and Gotthold Ephraim Lessing –, works by his contemporaries, such as Max Frisch and Paul Celan, but also many art books and collections of caricatures. Dürrenmatt arranged his books by the authors’ native tongues but mostly read them in German translation.

There are 4,000 more books kept in his second villa. They are mainly philosophical and scientific tomes – a testament to the diversity of Dürrenmatt’s interests and his cosmological outlook. Some of these works inspired his literary and visual work, to a greater or lesser extent. 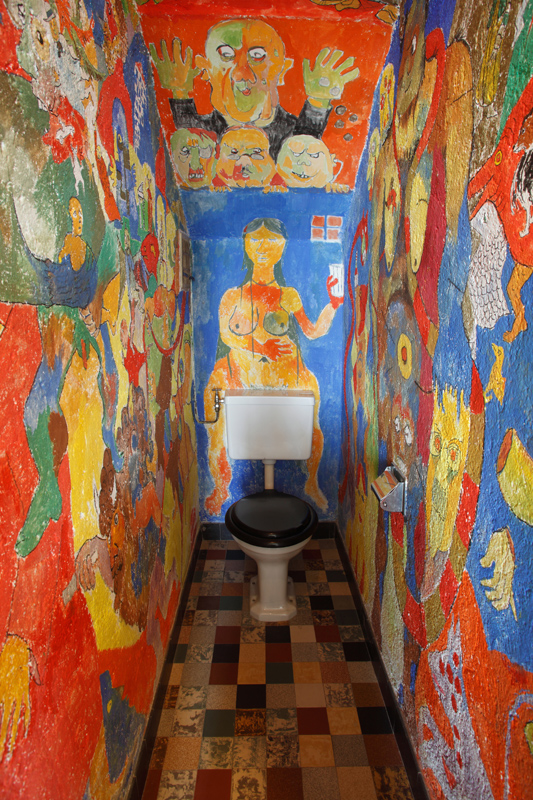 From the early frescoes he painted in his student attic room in Bern, Friedrich Dürrenmatt painted murals in almost every place he lived. In the mid-1960s, he painted a vividly-coloured and joyous fresco in the toilet of his Neuchâtel home.

In it, we can identify characters from his plays, such as the bankers from ‘Frank the Fifth’ and the emperor from ‘Romulus the Great’, as well as other recurring motifs in his work, such as Hercules, the Minotaur, mammoths, popes, angels and demon cyclopes. The right-hand wall also features the Continental Toy Spaniel Shérif, one of the Dürrenmatt family’s pets.

Not without a hint of irony, family members dubbed this space the ‘Sistine Chapel’, in reference to the Renaissance masterpiece painted by Michelangelo in the Vatican, which Dürrenmatt visited in 1966. 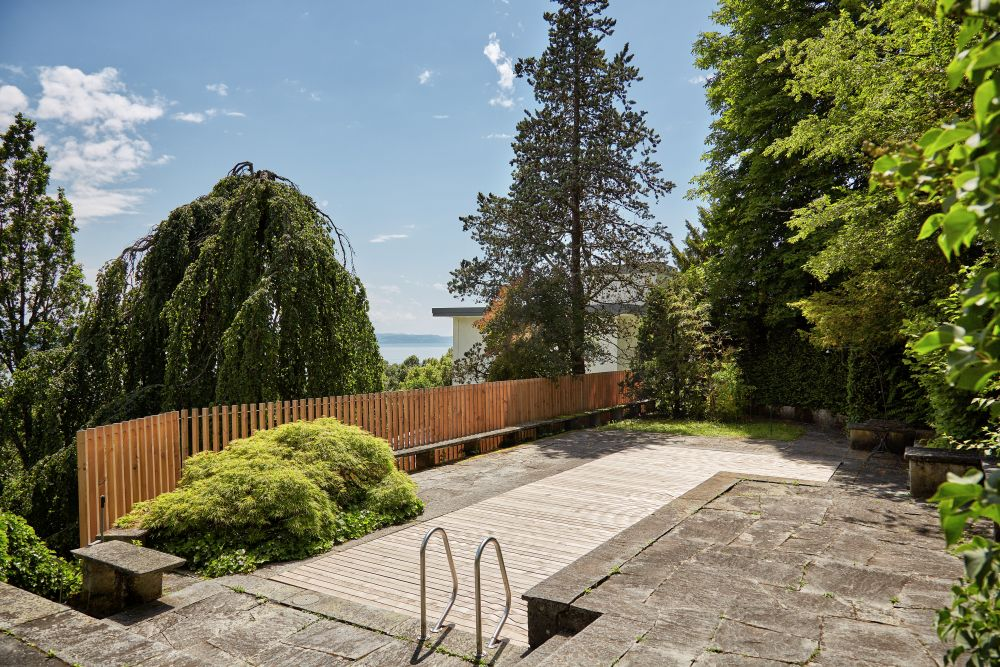 In 2021, the CDN inaugurated La Piscine, an open-air venue for performing arts, built on the site of Friedrich Dürrenmatt’s former swimming pool, situated between the two houses. The venue hosts shows, readings and concerts in the idyllic and tranquil setting of the CDN gardens. 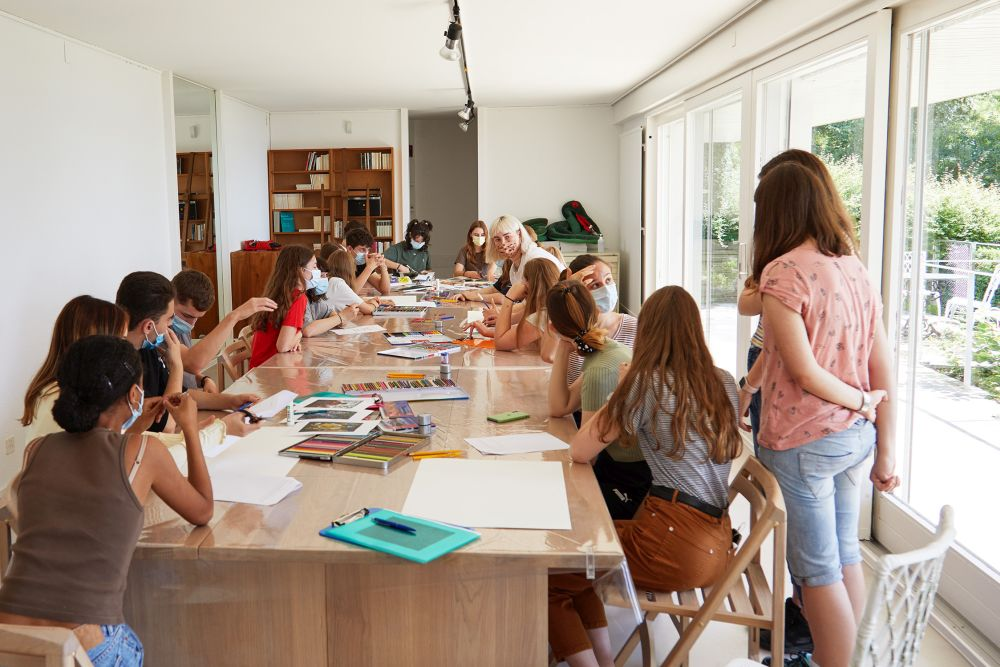 A studio situated beneath the second villa, which housed a music room and a workshop during Dürrenmatt’s life, has been turned into an arts outreach centre for schools. 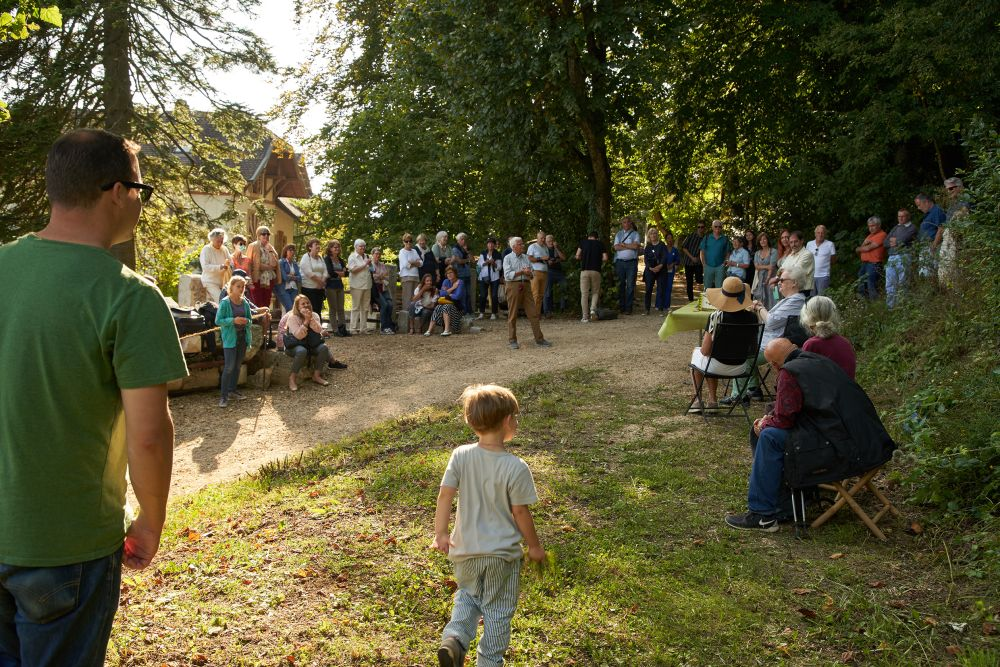 A leafy trail was built in 2021 to link Neuchâtel’s Botanic Garden with the CDN. It features an apiary which will be gradually decorated by Ruth Dürrenmatt, artist and daughter of Friedrich Dürrenmatt.